Welcome to this Friday’s devlog. First, I want to thank all of you who follow these devlogs. I’m saying thank you, not only because I appreciate your support, but also because these numbers clearly indicates the popularity of the game.

“Startup Company” was my first game. It already sold more than 350.000 copies. Yesterday I compared Big Ambitions’ numbers with Startup Company at the same time of development. The results are amazing: Big Ambitions have 3 times more readers and twice the engagement rate per visitor (how many of you who comment, upvote, retweet etc). This really indicates a bright future for the game, and allows me risk investing a little bit more. Once again, thank you!

First glimpse of the final map 🌇

As I talked about before, we’re currently using a temporary map while building the mechanics. For the last couple of months, the team has been working on the final/full map of the game.

Today, we can for the first time, show you some early footage of the new map. We know the trees look bad, the streets are empty and the interiors are repetitive. However, I still believe this clearly shows you the high level of quality we’re striving for.

The below screenshots and videos are directly recorded on my own computer, a rather old Intel i7 with a GTX 1060. This is not cinematic or some unrealistic high settings. There’s no cheating, this is the gameplay quality you can expect. 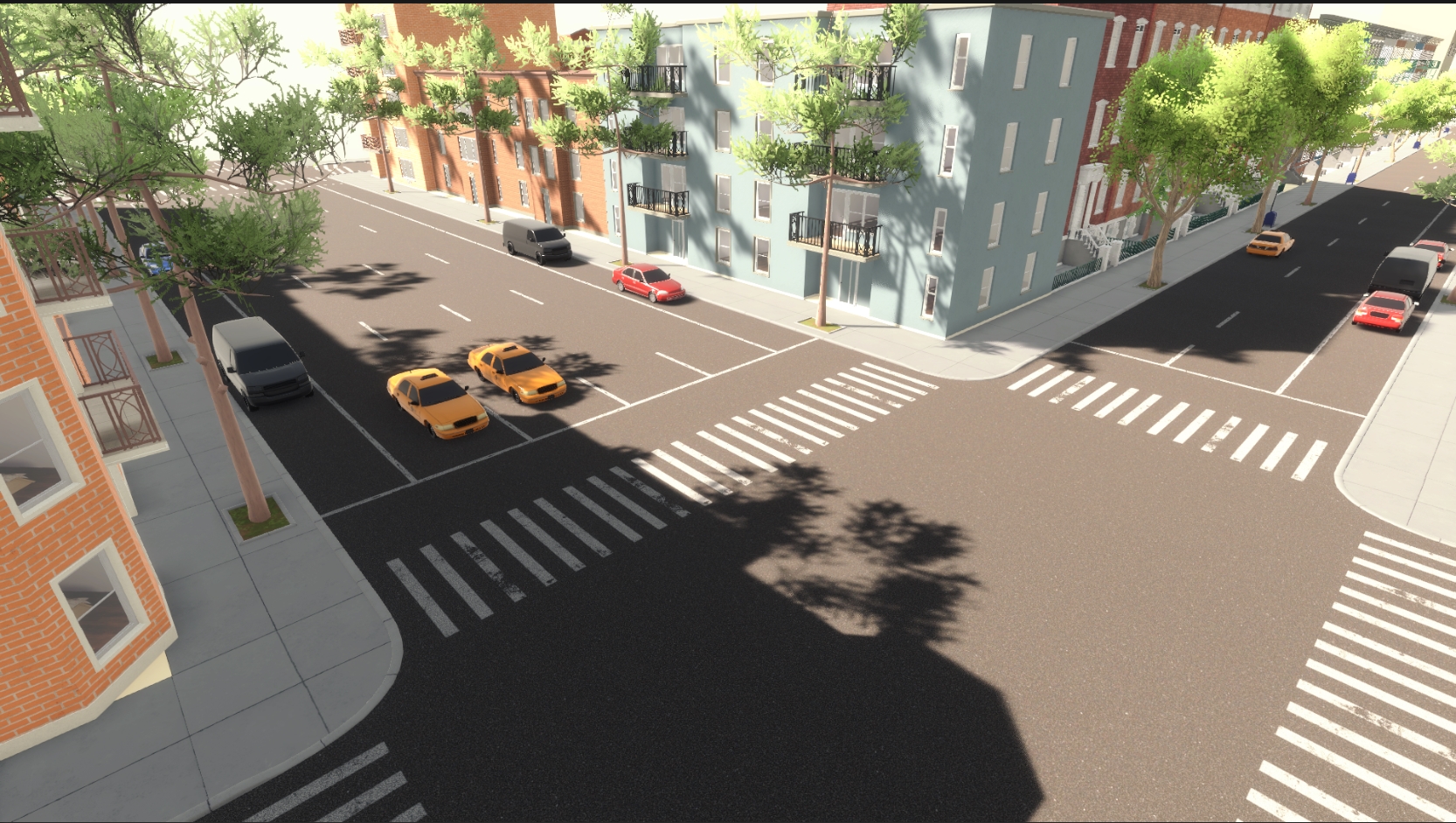 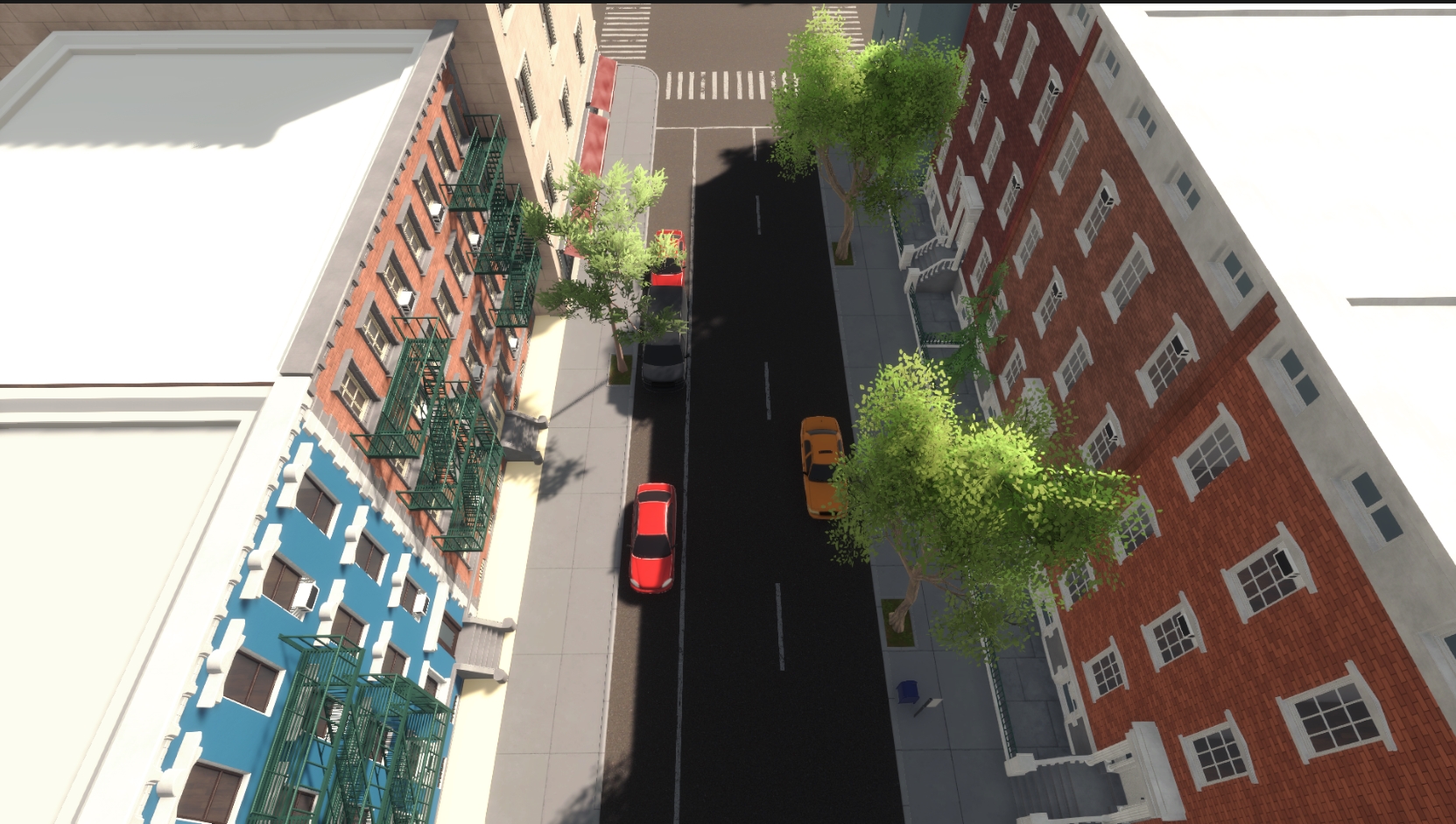 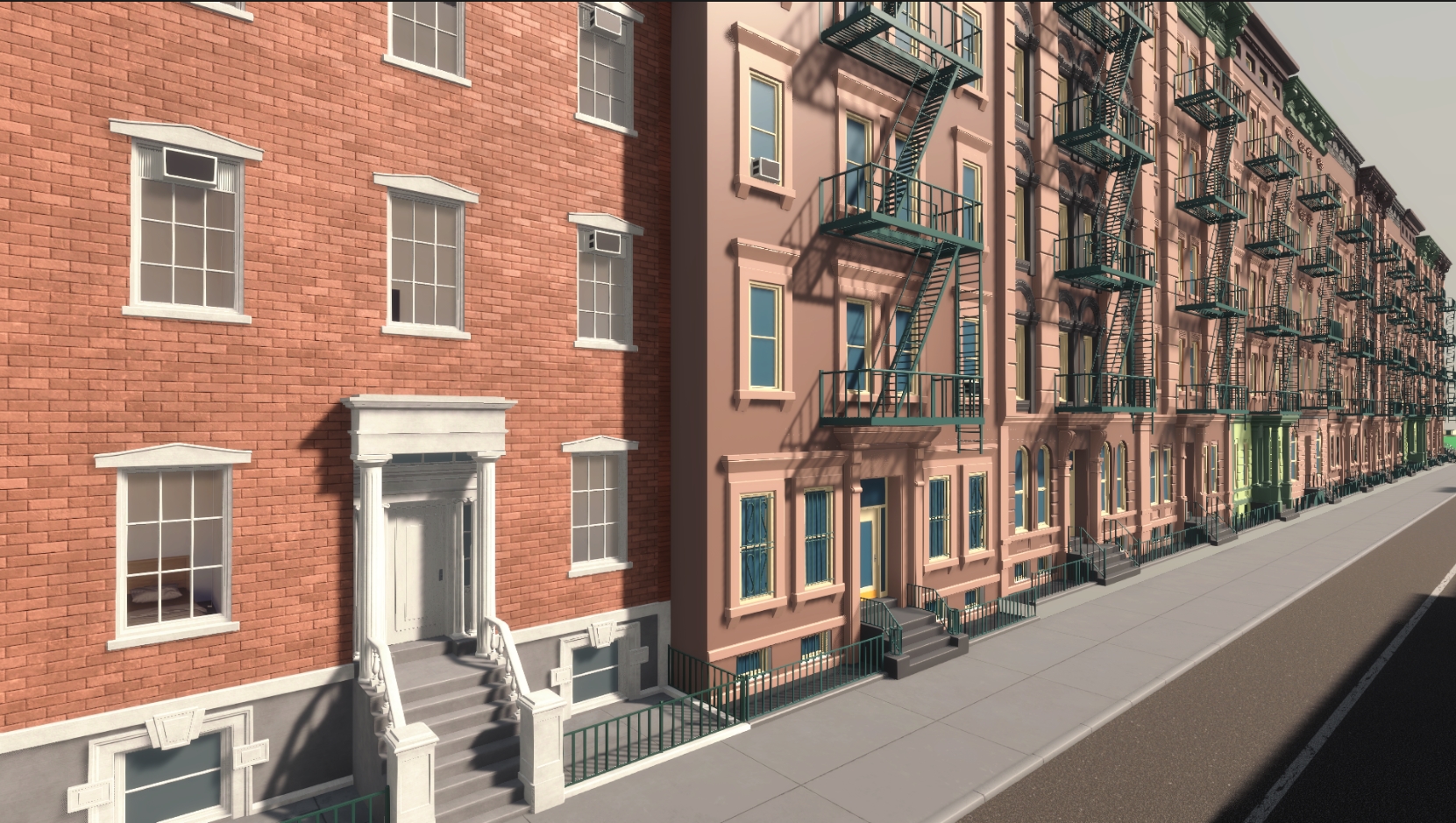 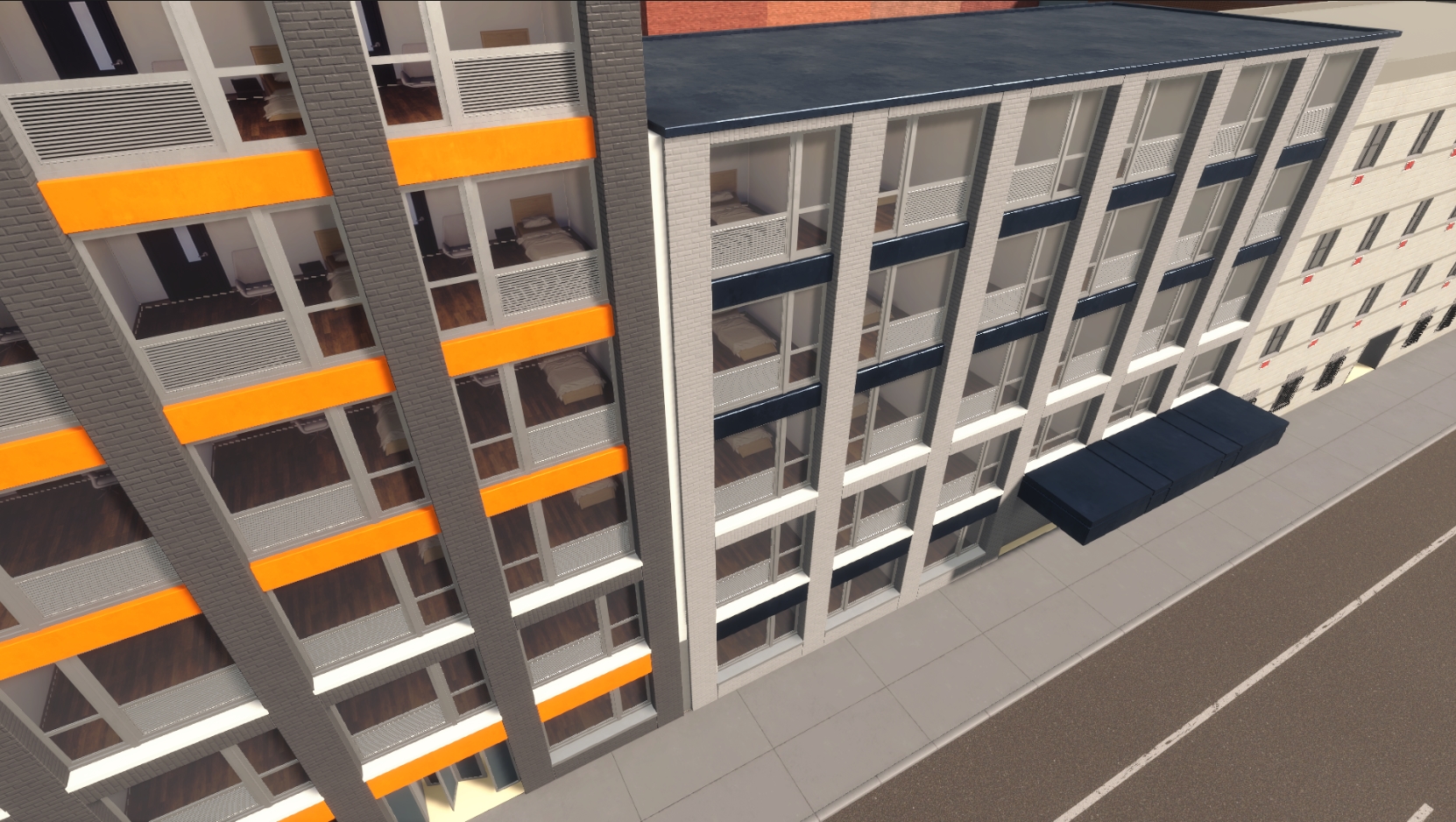 We talked about him before. Uncle Fred is probably the most important character of Big Ambitions. He’s your better-knowing uncle who points you in the right direction of becoming a rich city tycoon. Today he got a face too.

Uncle Fred is inspired by a book I read, that fundamentally changed my personal way at looking at money and wealth. I’m curious if anyone can see the reference in Uncle Fred? If he looks familiar, please let me know in the comments 😊 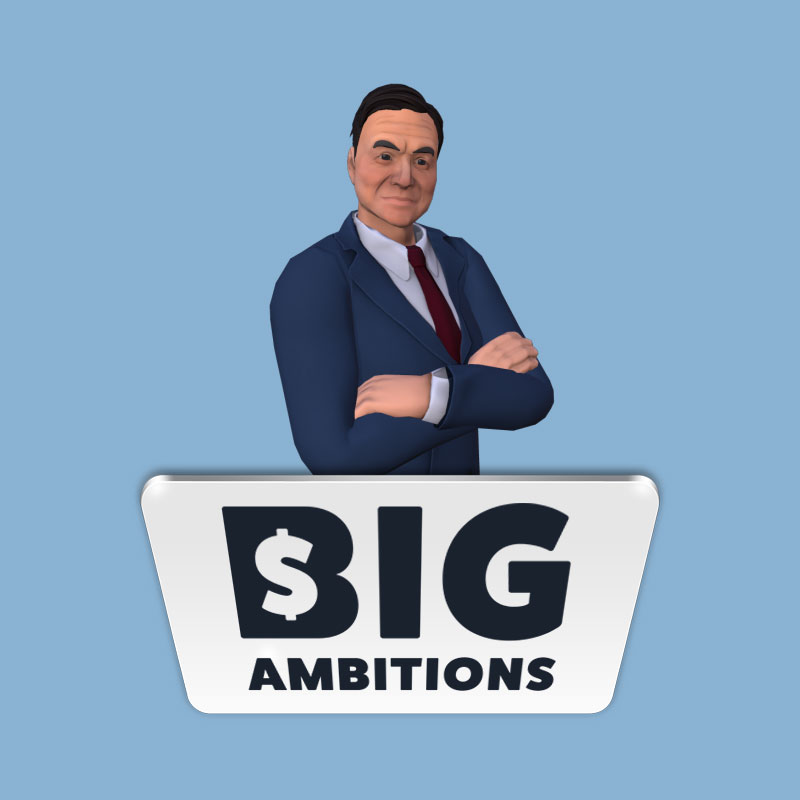 Implementing and designing the UI of Big Ambitions has definitely been a huge task, taking up months of hard work. Recently I started converting the smaller UI pieces into production UI. This time the UI handling both cargo and the items your character holds. There’s still room for improvement UX wise, but it does look great, don’t you think?

In the last devlog I presented our fake building interiors. Since then, the team have perfected it. We still need to create more room variations, but the technology is definitely on point.

Until now, the blurry background you saw when opening full screen apps, was really just a static photo. This is no longer the case, as the background is now dynamically blurred, based on what you actually see in-game. I’ve also added a small transition. I’m not sure how it looks on recording, but has a great feel to it!

The task did take more time than expected, 2 days to be exact. I had to rearrange all of the UI to make it work. Added bonus, it improved performance slightly 🥳

This morning, Robin our UI designer, sent me this final version of the Interview Lite app. This app is used to visualize the citizen interviews you perform in the different neighborhoods.

As you can see, it’s pretty straight forward: You got all neighborhoods in the top. In order to get good insight about what kind of business, will be most profitable in each neighborhood, you have to interview citizens based on the accuracy indicators. 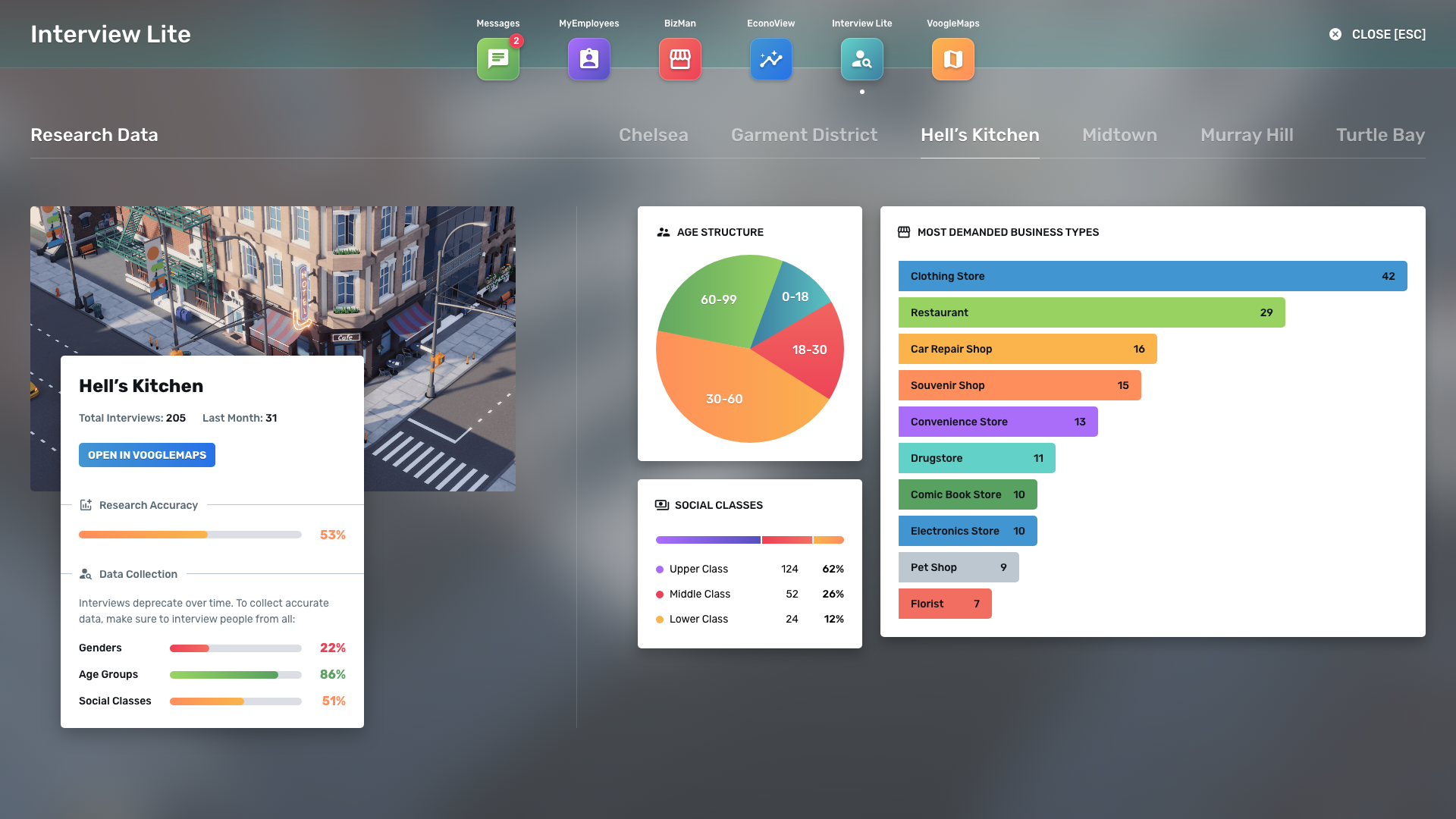 In these days it’s more important than ever to be completely inclusive, also in video games. As you saw in last devlog, playing as a man, you can choose to hit the gym non-stop to build up a very muscular physique. Obviously, we had to include the female character too 💪 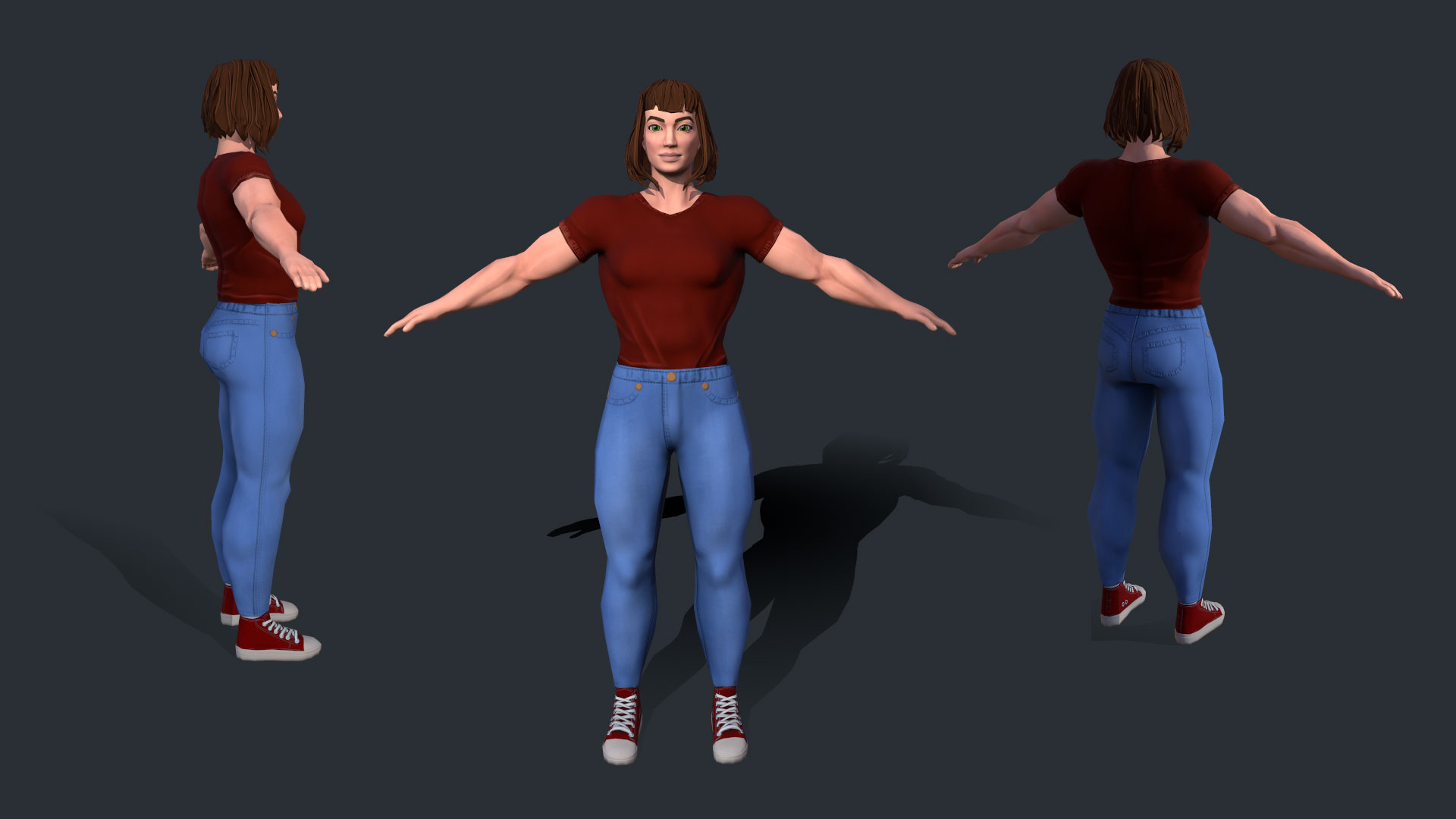